Overview of the great saxophonist's career...

This compilation, produced to accompany Michelle Mercer's biography of the same title, maps Wayne Shorter's remarkable career asa composer and interpreter with great precision. It details how profound an evolution jazz has undergone over Shorter's lifespan, to an extent where it's impossible to disentangle his progression as a saxophonist from that of the genre itself.

Shorter is said to have played a substantial role in selecting the 22 tracks. To speculate about the extent of his involvement with the anthology is unavoidable: Shorter belongs to an era of great performers who would allow their emotional range to play a structural role in the makeup of their jazz DNA. For them, bravura and virtuosity are nothing without a story to tell. As such, a compilation like this almost immediately translates into biography.

It goes from Shorter's early solo records, his collaborations with Miles (in so doingrevealing his formidable originality as a composer, spanning from Speak No Evil to Bitches Brew), to the genius of the early Weather Report - where his inimitable sound reaches one of its many creativepeaks. And then beyond, with the absorption of a fusion-implemented Brazilian vocabulary (eg: the collaboration with Milton Nascimento in Native Dancer).

From there, the anthology follows Shorter's ingenuity as an innovator spreading over many a crossover experiment (Steely Dan; Joni Mitchell), including the more divisive ones (the overflowing synthesisers that plagued the Eighties). But even then, Shorter's class is not to be overlooked. And thus to the present day: the formidable acousticquartet and the recent collaboration with Herbie Hancock.

The only two remarkableomissions from this double-cd collection are the seminal Juju and Night Dreamer: regrettably no material from either is featured (presumably due to licensing limitations).

Last but not least, the choice of "Footprints" as title track pays homage to Miles the mentor, the man without whom all this wouldn't have happened as it did. Miles' last words to Shorter were for his genius 'to be more exposed'. Hence this compilation, one guesses. Yet again, the Shorter story is thereto amaze us. 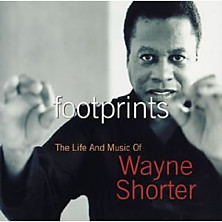