Whatever the sound of his records, the punk inside Moore still lives.

Given Sonic Youth’s epic 30-year catalogue and his own splurges of mostly improv- and/or noise-based collaborations, you wouldn’t expect Mr Kim Gordon to pick up an acoustic guitar and go all third Velvet Underground album on us. But Moore’s preceding solo album, 2007’s Trees Outside the Academy, contained a handful of dreamy odes, which Demolished Thoughts expands from delicate beginning to serene end. Don’t let its wired and desperate title fool you.

That said, the mood is anything but Drake-style depressed resignation or even Sea Change’s relationship meltdown. Moore’s breathy vocals and lyrical agenda come from a more accepting place – a reflection of middle age with plenty of life left (spring, not autumn). Given how many projects Moore still contributes to, that’s pretty much a given. Here, he builds his tender tunes on swathes of acoustic thrumming, in mesmerising and nuanced patterns, often at length (nine songs average out at five minutes plus), with more British hallmarks (the acoustic mastery of John Renbourn, Martin Carthy and Michael Chapman). There are expected ruminations – Orchard Street (the sole up-tempo strummer) looks back at New York City, where Moore arrived in 1976, full of young poetic punk dreams and a fantasy of marrying Patti Smith. And then there’s the unexpected – Benediction hints at religious faith.

There are only subtle shifts between Moore’s songs and Beck’s airy arrangements, but that’s hardly a criticism since this mood piece sucks you in. In a career of benchmark highs, he’s made yet another; and by doing the unexpected, it shows that whatever the sound of his records, the punk inside Moore still lives. 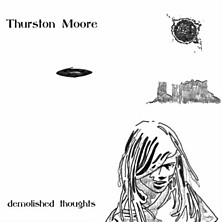