In his recent biography, Mike Oldfield, acknowledged the influence Keith Tippett’s jazz and rock 50 piece band, Centipede, had upon the development of his own musical extravaganza, Tubular Bells. Performing Tippett’s extensive Septober Energy took an immense amount of resources – RCA even chartered the band their own jet when they performed on the continent. It was big and clever and unsurprisingly the label wanted a lot more where that came from.


What they got was Blueprint – the first Ovary Lodge album although the name hadn’t been coined at that point – a record of introspective, left-field improvisation. As far-removed from Centipede’s ballyhoo as it was possible to be, this and the second album, 1973’s Ovary Lodge, constituted Tippett’s farewell notes to the company and the last time his work would receive major label treatment or mainstream media attention.


If Centipede was Tippett imposing his individual musical will over others, Ovary Lodge was about immersing himself into the collective stream. With Roy Babbington off to play bass in Soft Machine, South African-born, bassist Harry Miller joined Keith, his wife Julie, and percussionist, Frank Perry whose vast rig was more akin to sculpture than a kit. Together they produced an extraordinary sound that still seems far removed the outré free jazz scene pioneered by Derek Bailey, John Stevens, et al.


This live recording from 1975 (its first time on CD) reminds us as to just how eclectic a quartet Ovary Lodge could be, going anywhere it wanted without regard to cultural or stylistic boundaries and norms. The aptly titled 17 minute long “Communal Travel” evokes Berio-style vocalese, Eastern ceremonial temple music; enigmatic pulses; shrill high-frequency throbbing, cavernous growls, proto-world music ruminations, and moments of transcendent beauty where their musical telepathy takes your breath away.


It’s hard to believe there are only four musicians at work here such is the density, richness and diversity of their sound. Ovary Lodge is without doubt a difficult, rigorous and demanding album. It’s also an exciting, dramatic rollercoaster ride in the company of some of the 70s UK jazz scene’s brightest players. 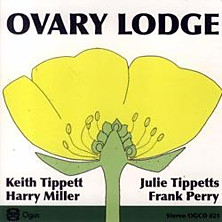