John Lydon knew better than most of what he spoke when in 1986, with all the emotional flexibility of a Dalek, he asserted that "anger is an energy". He might well have added that there are other forms of resentment and discontent that burn with a phosphorescence sufficient to fuel a band’s entire career. This is something about which Pontypridd’s Lostprophets are well informed.

Despite a profile large enough to fill any theatre in the United Kingdom, and an album that registered more than half a million sales in the United States – 2004’s Start Something – the perception surrounding this group is often that they appeal to fans who are little more than children – that they’re a "Kerrang! band", if you will. Unfair as this may be, Lostprophets remain a collective unlikely to be booked to appear on primetime chat shows.

A sense of working class, us-against-the-world defiance is the emotion that most defines Weapons. Whether what is known in the class war as chippiness is suitable inspiration for musicians now into their 30s is a question that can only be answered by the ear of the beholder. The case for the defence, though, is strong, not least of all because this svelte 10-song set is not lacking in conviction.

Because of its compact form and committed performances, Weapons is a release that burns brightly. Its cause is aided by the fact that Lostprophets are a quite fabulous band in motion, one equipped with not just power but also nuance. Featuring the magic ingredients of keyboardist and turntablist Jamie Oliver – a man who fills the album’s spaces with subtle shades that afford this work a depth lacking in comparable releases – and the guitar pairing of Mike Lewis and Lee Gaze, the arrangements of the sing-along-ready Another Shot and the driving Heart on Loan display in glorious Technicolor that this is a group understanding that a song can be more than played, it can also be interpreted.

In this light, Lostprophets’ grievance that theirs is a union confined to the popular but removed confines of rock’s bouncier quarters is well justified. For this is a fine album that warrants serious investigation from any and every rock circle. 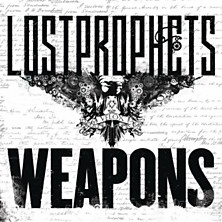