Fourteen years on, this still sounds like the undiscovered future of rock‘n’roll.

When Accelerator was first released in 1998, many alt-rock fans didn’t get what the critical fuss was about.

The surrounding stuff about Royal Trux's twin bandleaders - Sid-and-Nancy-like couple Jennifer Herrema and Neil Hagerty - being unrepentant heroin users, or about the album being the last in a trilogy dedicated to specific decades (following Thank You’s tribute to the 60s and Sweet Sixteen’s look at the 70s) didn’t help, especially as Accelerator sounded nothing like the 80s.

Fourteen years later, this reissue reveals a record so unique and ahead of its time that nothing else has sounded like it since. On one level, the modus operandi Herrema and Hagerty employed for their seventh album is simple: take their Stones-meets-New York-punk rock‘n’roll and feed it through cutting-edge digital technology. But the results were way more interesting than anything you might label electro-rock.

Guitars are gated and processed until the sound strips paint. Sneering voices rise and fall in and out of the freewheeling murk. Stereo effects are added in such extremes that it occasionally sounds like four different bands in four different studios accidentally playing the same song.

Yellow Kid sounds like Bob Dylan joining The Velvet Underground for a party on elephant tranquilizers. Another Year is Devo played by a Latin kazoo orchestra. Juicy Juicy Juice is T. Rex remixed by cubists. And the closing Stevie is a strangely beautiful blue-eyed soul ballad about Steven Seagal.

What any of this has to do with the 1980s remains a mystery. If anything, Accelerator is definitively pre-millennial; an attempt to party like its 1999 before The Man finally makes this kind of narcotic sleaze illegal.

Herrema and Hagerty split romantically and creatively just four years and two albums later. They both still make music, but are unlikely to match a masterpiece that still sounds like the undiscovered future of rock‘n’roll. 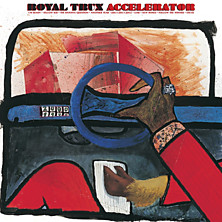