Урок 1: English In A Minute
Give us a minute and we'll give you English 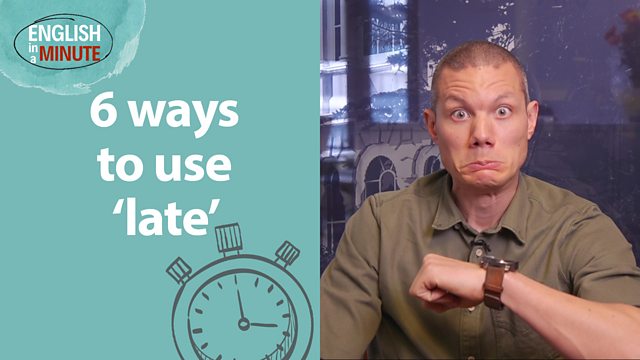 Помощь
True or false: 'Late' is only an adjective
a True U29ycnkhIFRoYXQncyBub3QgcmlnaHQuICdMYXRlJyBjYW4gYmUgYW4gYWRqZWN0aXZlIG9yIGFuIGFkdmVyYg==
b False V2VsbCBkb25lISAnTGF0ZScgY2FuIGJlIGFuIGFkamVjdGl2ZSBvciBhbiBhZHZlcmIh

Помощь
Which of these prepositions can you NOT use with 'late'?
a by V2VsbCBkb25lISBXZSBkb24ndCBjb2xsb2NhdGUgJ2xhdGUnIHdpdGggJ2J5Jy4=
b for U29ycnkhIFdlIG9mdGVuIHVzZSAnbGF0ZSBmb3InLiBJJ20gbGF0ZSBmb3Igc2Nob29sIQ==
c of U29ycnkhIFdlIGNhbiB1c2UgJ29mIGxhdGUnIHRvIG1lYW4gJ3JlY2VudGx5Jy4gSSd2ZSBiZWVuIHN0dWR5aW5nIG1vcmUgb2YgbGF0ZS4=