We've created a personalised tour of the BBC just for you! Here's your chance to take a look around the old and new headquarters, learn some history, hear some comparatives and superlatives in action and practise what you've learned so far.

We have a special treat for you to start Session 3 – our very own BBC Learning English tour of Broadcasting House with John Escolme, the BBC’s History Manager! He will show us some of the newest and oldest parts of the building and tell us more about the history behind it. Pay attention to how he uses comparative and superlative forms – you can read the transcript to help you if you like. 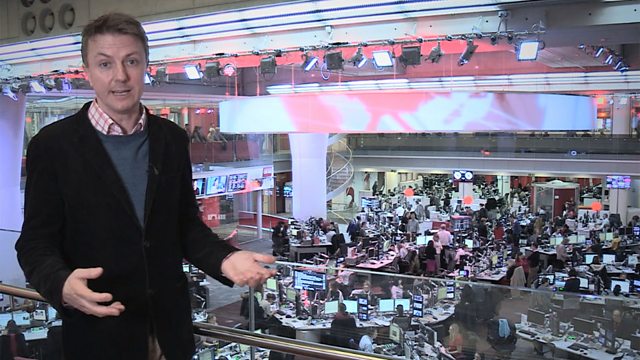 Well, here we are inside Old Broadcasting House in an area where we keep some of our treasures and one of the most historic items is an old microphone. Well, these are three microphones, three very important microphones, and larger than today's microphones but very important because this is the first microphone that broadcast the voice of the monarch to the world in 1932 – King George the Fifth's words were first heard through these microphones.

So, now we're in New Broadcasting House and we're in one of the busiest places in the building – we're in the newsroom.  The newsroom is the largest in Europe, it's also bigger than the old one because all the journalists are working together to share stories and it's busier because there's so much activity going on here. Let's move on.

So, this is one of the many radio studios you'd find in New Broadcasting House. As you can see, it contains all the latest technology so we can broadcast across the world – BBC World Service programmes – or programmes from BBC Learning English – and it's much smaller than an old radio studio. Years ago we'd be using big reels of tape to record just a few minutes of programmes.

Well, we've even more exciting things to show you, so come this way.

This, of course, is a TV studio and here we have some of the TV cameras that we use for World Service television news bulletins, these are much smaller than they used to be. In the 1950s and 60s they were much bigger. And here is where our newsreader would sit, put on his or her best smile and deliver the news, good or bad.

OK, we've got one more thing to show you, follow me.

Well, we're nearly out of time but before we go let me introduce you to one of the most famous things in this building. From the television programme Doctor Who, yes, it's a Dalek!

Now, although we have a lot of famous people coming through this building, this Dalek gets more attention than anything else. The Dalek was designed in 1963 – this isn't an original – in fact this is the version for the 21st century in gleaming, glittering, gold fibreglass.

Well that's the end of the tour. Thanks for joining me and I hope it's been as informative as you had hoped. Come again soon and bye for now.

Look at the adjective forms in the sentences above. Are they comparative or superlative forms?

Well, they are superlatives (the most interesting, the most famous) but there are two very important words just before them: one of…

How does this change the meaning? In an old, well-known place like Broadcasting House, there are many famous and historical items. Who can say which one is the most famous? For history-lovers, it may be the microphone used by King George V. For science-fiction fans, it would most likely be the Dalek. For people who love music, it might be one of the mementoes of The Beatles.

However, everyone can agree that these different items are each one of the most famous. Let’s look at some more examples:

As John says at the end of the video: “I hope it's been as informative as you had hoped!”

Let’s look at that sentence carefully. In this case, we do not see a comparative (more informative than…) or a superlative (the most informative…) Instead, we see as informative as… What does this mean? Look at the following examples and see if you can work it out:

Answer: We use the structure as + adjective + as to describe two things that are the same in some way.

Please check out our grammar reference for more explanations and examples.

Look at the words below – they are all jumbled up! Can you re-arrange them into sentences?

What did John really say?

Help
broadcast
centre
world
is
advanced
It
the
the
most
in
Correct - well done!
Wrong - try again
SXQgcHJvdmlkZXMgYSBiZXR0ZXIgd29ya2luZyBlbnZpcm9ubWVudCBmb3Igc3RhZmY=

Help
BBC
is
it
was
much
than
years
20
The
busier
ago
Correct -well done!
Wrong - try again!
VGhlIEJCQyBuZXdzIHRlYW0gaXMgb25lIG9mIHRoZSBmYXN0ZXN0IGluIHRoZSB3b3JsZA==

Help
The
of
news
the
fastest
is
one
team
world
BBC
the
in
Correct - well done!
Wrong - try again
QnJvYWRjYXN0aW5nIEhvdXNlIGlzIG9uZSBvZiB0aGUgbW9zdCBpY29uaWMgYnVpbGRpbmdzIGluIExvbmRvbg==

Help
one
iconic
House
in
the
London
of
buildings
Broadcasting
is
most
Correct - well done!
Wrong - try again
T25lIG9mIHRoZSBtb3N0IGhpc3RvcmljIGl0ZW1zIGlzIGFuIG9sZCBtaWNyb3Bob25l

Help
historic
One
the
of
microphone
items
an
is
most
old
Correct - well done!
Wrong - try again
VGhlIEJCQyBpcyBzdGlsbCBhcyBpbXBvcnRhbnQgYXMgZXZlcg==

How did you get on? Next we will review and extend what we have learned so far in this unit and focus on listening with a quiz about the video you've just seen.