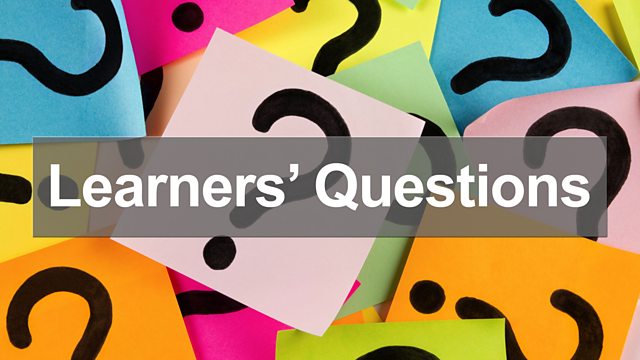 Dan
Hi guys! Dan here for BBC Learning English with this week's Learner Question. Find out what it is after this.

OK! This week's learner question comes from Ayoub in Iraq. "My question is when should we add to after verbs and when should we not?" Well, Ayoub, this is a huge area of English and extremely tricky grammar, but we're going to give a very basic explanation. What you're talking about is called a verb pattern. Verb patterns occur in English when one verb is followed by another verb. For example: I want to play. There are three basic types of verb pattern: the full infinitive – to play, that's with the to. The bare infinitive, that's without the to – play. And the –ing form – playing. Because you asked about infinitives and bare infinitives, we're only going to focus on those two.

Unfortunately, Ayoub, there are some verbs in English which are just followed by the full infinitive. There's no particular reason why – because, because. Examples of these are agree, want, hope, expect, and refuse. For example: I hope to eat or I want to eat. Likewise, there are some other verbs which are just followed by the bare infinitive. These include modal verbs, so: can, can't, will, won't, must. I must go, I can go, I will go. You have to learn them. There's nothing else to say about that. I'm sorry.

I hope that answers your question Ayoub. Thank you very much for writing to us. If anybody else out there has a question for Learners' Questions, please email us on: learning.english@bbc.co.uk. Please remember to put Learners' Questions in the subject box and your name and the country that you're writing from or where you're from. We can't answer every single one because we get so many, but we do read them all. And for more information don't forget to go to our website: bbclearningenglish.com. Alright, that's it for this week's Learners' Questions. I'll see you next time.

Verb patterns
In English when two verbs are used back-to-back, the first verb tells the second verb what form to take. This is called a verb pattern. Verb patterns cannot usually be changed and must be learnt as they are. There are three basic types of verb pattern:

1. Verb plus full infinitive (with 'to'): verb + to + verb
There are many verbs in English which have to be followed by a full infinitive, including agree, want, hope, expect, and refuse.
I agree to go
I wanted to go
I will refuse to go

2. Verb plus bare infinitive (no 'to'): verb + verb
There are many verbs in English which have to be followed by a bare infinitive. A large number are modal verbs such as can, can't, will, won't, must, mustn't, should, shouldn't, would, wouldn't, may, might, have to, don't have to.
I must go now
She will go now
He may go soon

3. Verb + –ING form: verb + verbing
There are many verbs in English which have to be followed by the 'ing' form of the verb, including verbs of liking, saying and thinking such as love, hate, suggest, deny, recommend and avoid.
He denied taking the money
I recommend waiting for a few minutes

Adjective plus full infintive
Generally, if we wish to use a verb after an adjective, we use a full infinitive:
It's good to see you
It's important to remember your keys

Clause plus full infinitive
We can use a full infinitive at the end of a clause to say why we are doing something. This is called 'the infinitive of purpose'.
I'm going home to sleep
I want a dog to play with

What type of word is 'wonderful'? What is the form of the verb that comes after it?

도움
Thank you for your welcome. It's wonderful see you all today.
a Correct QmFkIGx1Y2suICdXb25kZXJmdWwnIGlzIGFuIGFkamVjdGl2ZS4gSXQgbmVlZHMgYSBmdWxsIGluZmluaXRpdmUgdG8gZm9sbG93IGl0Lg==
b Incorrect V2VsbCBkb25lIQ==

도움
I don't have time. I must to go to the doctor.
a Correct U29ycnkuICdNdXN0JyBpcyBhbHdheXMgZm9sbG93ZWQgYnkgYSBiYXJlIGluZmluaXRpdmUg4oCTIG5vICd0bycu
b Incorrect R29vZCBqb2Ih

Why are they going to France? What form is the verb after the main clause?

도움
They are going to France to see their family.
a Correct RXhjZWxsZW50IQ==
b Incorrect QmFkIGx1Y2suICdUbyBzZWUgdGhlaXIgZmFtaWx5JyBpcyB0aGUgaW5maW5pdGl2ZSBvZiBwdXJwb3NlLiBJdCBleHBsYWlucyB3aHkgdGhleSBhcmUgZ29pbmcgdG8gRnJhbmNlLg==

What is the main verb? What form is the verb that follows it?

Well, that's it for this unit! Join us again in Unit 6 for more Exam Skills, News Review, Pronunciation in the News, The Teachers' Room and Learners' Questions!