Find out about Britain's Great Storm, listen to weather reports, practise grammar and vocabulary and write a report about the weather where you are.

Britain has a warm and wet climate – also called a maritime climate – but other parts of the world have different climates, as we're about to find out. We asked three people from different countries to tell us about the weather where they come from. Listen to Irena, Carolina and Carol describing the weather in their countries - do any of them have weather like yours?

Listen to the audio and do the activity 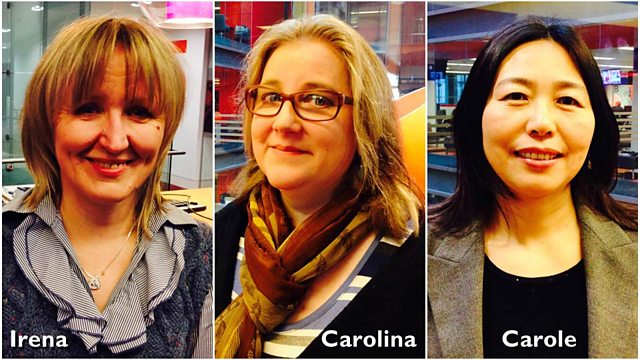 Irena - Ukraine
My name is Irena and I come from Ukraine. In Ukraine in winter, it's really beautiful because we have loads of fluffy snow; snow virtually covers - like a duvet – the ground turning everything white and silvery. So it can be very fantastic looking because the glum and doom of the wintery weather can be, in a way, improved by the snow cover but it is much colder. The summers, on the other hand, are very warm and beautiful. A typical temperature in the summer would be high 20s, early 30s. In Ukraine we can have spectacular thunderstorms in the summer, with beautiful bolts of lightning with really loud thunders and huge rains, tornados. Lately, the distinction between the seasons aren't quite as sharp as in the past because you can have snow in April, you can have thunderstorms in winter, so there is a lot of confusion with the weather and some people attribute it to the global warming.

Carolina - Argentina
Hello I'm Carolina and I'm from Argentina.  I'm from the province of Buenos Aires. The winters can be very cold. We get frost in the winter and it could look like snow because it is really really white. And the summers are very very hot, you get like 40 degrees. You get really strong thunderstorms. And the rain would be really severe – it feels like buckets coming down. My grandmother would say 'it's raining scissors'. I think the weather has changed a lot – we had the Chaitén volcano that erupted a few years ago. I think it's changed the weather long-term and I think we're going to keep seeing that maybe in decades unfortunately.

Rob
What about climate change in general? Do you think that has affected the weather – not just the volcano?

Carolina
The summers have been very very hot, hotter than usual. Some my cousins complain the winters are colder so I definitely would put it down to climate change because it's just erratic – it just doesn't make sense.

Carol - China
My name is Carol, I want to tell you something about the winter in Shenyang. It's basically, bitterly cold, so the temperature in winter can drop down to minus 30 degrees. So when you breathe, you know, basically your breath can form a layer of like, frost, particularly when you wear facial mask. Some people get frostbite on their hands and their toes. You know, you have to wear a lot. It snows a lot as well. The spring usually starts from, I would say, April and then it can be really really windy.  Basically the wind blows everything, dust, everything - you can taste sand in your mouth. The summer can be really really hot. The heat really really hits you. It's like when you come out of an air-conditioned room or building and then you're hit by this heatwave – it's basically like you are in an oven. I think climate change has caused more wind storms because it happens more and more, compared to maybe twenty, thirty years ago. Now, it's getting worse and worse basically, and it's lasting longer as well, so I think there is a factor of climate change. This is definitely a global thing, I mean people can, you know, feel it everywhere.

Try this activity and see if you can remember which countries experience which type of weather.

Help
In winter, temperatures can drop down to minus 30 degrees
a Ukraine V3Jvbmcg4oCTICBDYXJvbCBmcm9tIENoaW5hIHNhaWQgaW4gU2hlbnlhbmcgaW4gQ2hpbmEgJyB0ZW1wZXJhdHVyZXMgY2FuIGRyb3AgZG93biB0byBtaW51cyAzMCBkZWdyZWVzJw==
b Argentina V3Jvbmcg4oCTIENhcm9sIGZyb20gQ2hpbmEgc2FpZCBpbiBTaGVueWFuZyBpbiBDaGluYSAnIHRlbXBlcmF0dXJlcyBjYW4gZHJvcCBkb3duIHRvIG1pbnVzIDMwIGRlZ3JlZXMn
c China Q29ycmVjdCAtIHdlbGwgZG9uZSE=

Help
In summer, the rain can be very severe
a Ukraine V3Jvbmcg4oCTIGl0IHdhcyBDYXJvbGluYSBmcm9tIEFyZ2VudGluYSB3aG8gc2FpZCB0aGUgcmFpbiBjYW4gYmUgdmVyeSBzZXZlcmU=
b Argentina Q29ycmVjdCAtIHdlbGwgZG9uZSE=
c China V3Jvbmcg4oCTIGl0IHdhcyBDYXJvbGluYSBmcm9tIEFyZ2VudGluYSB3aG8gc2FpZCB0aGUgcmFpbiBjYW4gYmUgdmVyeSBzZXZlcmU=

Help
More recently, you can have thunderstorms in winter
a Ukraine Q29ycmVjdCAtIHdlbGwgZG9uZSE=
b Argentina V3Jvbmcg4oCTIGl0IHdhcyBJcmVuYSBmcm9tIFVrcmFpbmUgd2hvIHNhaWQgbW9yZSByZWNlbnRseSwgeW91IGNhbiBoYXZlIHRodW5kZXJzdG9ybXMgaW4gd2ludGVy
c China V3Jvbmcg4oCTIGl0IHdhcyBJcmVuYSBmcm9tIFVrcmFpbmUgd2hvIHNhaWQgbW9yZSByZWNlbnRseSwgeW91IGNhbiBoYXZlIHRodW5kZXJzdG9ybXMgaW4gd2ludGVy

Now you've experienced the British weather and weather from around the world, plus you've had a 'downpour' of weather-related words. In the next activity you can put all your learning together and write your own weather report.