The Experiment is a collection of short series that are a little different to our usual programmes - but still help you improve your English.

Our second series, This is Where… takes us on a tour of London to discover the origins of unusual English phrases.

In English, to steal someone's thunder means to take the attention away from someone else, when they were expecting to get all the credit.

Lots of people in the UK know what this phrase means, but not many people know where it comes from – as presenter Rav Wilding found out when he went to talk to some Londoners on the street.

I did the splits on the dance floor, but Elsie stole my thunder by doing a backflip!

Izzy made a great joke, but a dog ran on stage and totally stole her thunder.

Do you know where in London this phrase comes from? Watch the video then complete the next activity. 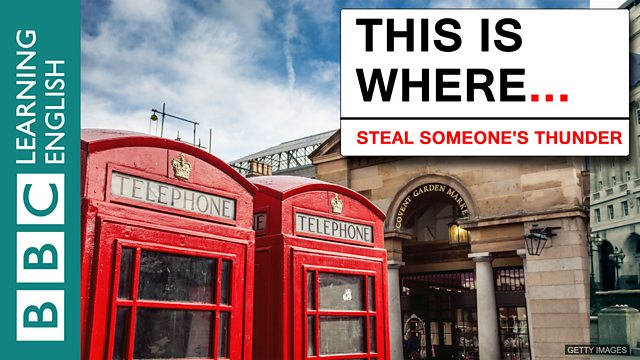 Rav
In the UK, if you said that someone had stolen your thunder, most people would know what you meant.

Man 1
It means that someone's taken credit for something that you've done.

Woman
I guess, they did something better than you did, and they took all the credit for it.

Rav
Can you give me a sentence where you would use that saying?

Man 1
I should have been promoted but someone else stole my thunder.

Man 2
I was going to make a unique presentation at work, and somebody had stolen my thunder.

Woman
If someone turned up to my wedding in a great big white dress, they've stolen my thunder.

Rav
But not a lot of people know where it comes from.

Where do you think that saying came from?

Man 2
I've not a clue. Maybe the British weather!

Rav
What these Londoners don't realise is that stolen your thunder came from here.

The Theatre Royal in Drury Lane is the oldest theatre in London's West End. It's even older than the BBC.

In 1709, a man named John Dennis invented a machine that made a noise just like a clap of thunder. The thunder machine was fantastic, but Dennis's play wasn't.

Soon after its opening night, his play was replaced by a production of Macbeth.

When John Dennis went back to the Theatre Royal to see this new production he was outraged to discover that his thunder machine was being used in Macbeth, and no one had asked his permission.

The story goes that he stood up and shouted “they will not let my play run, but they steal my thunder.” And so the phrase to steal someone's thunder was born.

And it came from the area around here, and not from up here.

Help
If someone steals your thunder they...
a take away your freedom Tm8uIElmIHNvbWVvbmUgc3RlYWxzIHlvdXIgdGh1bmRlciB0aGV5IHRha2UgYXdheSB0aGUgY3JlZGl0IG9yIGF0dGVudGlvbiB0aGF0IHlvdSB0aG91Z2h0IHlvdSB3ZXJlIGdvaW5nIHRvIGdldC4g
b take away your attention or credit Q29ycmVjdCEgSWYgc29tZW9uZSBzdGVhbHMgeW91ciB0aHVuZGVyIHRoZXkgdGFrZSBhd2F5IHRoZSBjcmVkaXQgb3IgYXR0ZW50aW9uIHRoYXQgeW91IHRob3VnaHQgeW91IHdlcmUgZ29pbmcgdG8gZ2V0Lg==
c take away your umbrella VGhhdOKAmXMgbm90IHJpZ2h0LiBJZiBzb21lb25lIHN0ZWFscyB5b3VyIHRodW5kZXIgdGhleSB0YWtlIGF3YXkgdGhlIGNyZWRpdCBvciBhdHRlbnRpb24gdGhhdCB5b3UgdGhvdWdodCB5b3Ugd2VyZSBnb2luZyB0byBnZXQu

Help
Why was John Dennis unhappy?
a Because his thunder machine was being used without his permission. Q29ycmVjdCEgSm9obiBEZW5uaXMgd2FzIHVuaGFwcHkgYmVjYXVzZSBoaXMgdGh1bmRlciBtYWNoaW5lIHdhcyBiZWluZyB1c2VkIHdpdGhvdXQgaGlzIHBlcm1pc3Npb24gaW4gYSBwcm9kdWN0aW9uIG9mIE1hY2JldGgu
b Because he didn’t like the production of Macbeth. Tm8uIEpvaG4gRGVubmlzIHdhcyB1bmhhcHB5IGJlY2F1c2UgaGlzIHRodW5kZXIgbWFjaGluZSB3YXMgYmVpbmcgdXNlZCB3aXRob3V0IGhpcyBwZXJtaXNzaW9uIGluIGEgcHJvZHVjdGlvbiBvZiBNYWNiZXRoLg==
c Because the weather in London was terrible. VGhhdOKAmXMgbm90IHJpZ2h0LiBKb2huIERlbm5pcyB3YXMgdW5oYXBweSBiZWNhdXNlIGhpcyB0aHVuZGVyIG1hY2hpbmUgd2FzIGJlaW5nIHVzZWQgd2l0aG91dCBoaXMgcGVybWlzc2lvbiBpbiBhIHByb2R1Y3Rpb24gb2YgTWFjYmV0aC4=

You can download the PDF document for this episode here.

Join us in Session 9 of The Experiment where we discover the origins of another London-born phrase.