Ssshhhh… it's a secret! It's William Shakespeare's birthday and there's a surprise in store for him. Plus, we're bringing you the phrase mum's the word and keep mum as well as lots more useful phrases for talking about secrets!

But what's going on in this image? Will has walked into his favourite pub but it looks like everyone is hiding from him! Why do you think this is?

Now watch the video to find out why Will's friends and family are hiding from him. Did you guess correctly? 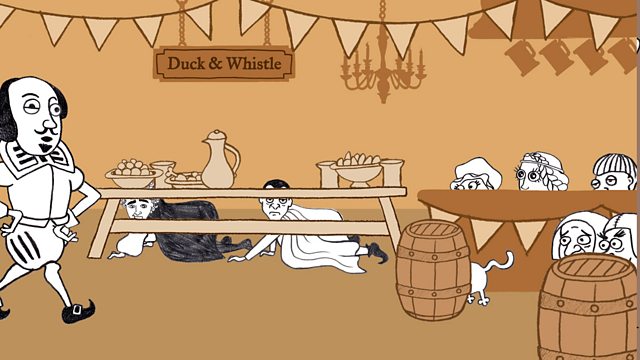 Narrator
It was the 23rd of April. William Shakespeare's daughter and his actor friends Robert Harley and Thomas Swann are at the Duck and Whistle. They're getting ready for a celebration. Bess the barmaid is in charge.

Bess
Now have we got everything? Beer, ale… Where's that Mary Bassett? She's supposed to be bringing the pies…

Mary
Here I am, pies and all! I've brought some lovely meat pies and I've got Mr Will's favourite here: a nice cherry pie.

Daughter
Oh, I'm so excited Mary! I love parties! Isn't it wonderful having a party for Father's birthday!

Mary
Now don't you go telling Mr Will before he gets here, Miss Shakespeare, remember: it's a surprise. Like John Hume says in your father's play Henry VI part II: Seal up your lips, and give no words but mum…

Thomas Swann as John Hume
Seal up your lips, and give no words but mum:
The business asketh silent secrecy.

Daughter
Give no words but mum… I promise, I won't say a word to anyone. Really, I won't!

Narrator
We'll leave them there for now. The exact date of William Shakespeare's birth is not recorded, but it's generally believed that the most likely date was Sunday the 23rd of April, which, interestingly, was also the date of his death, in 1616, at the age of 52. The phrase Give no words but mum, simply means: don't tell anyone - it's a secret. These days, it's usually simplified to just keep mum. Take Australian news website 9News, writing about Mark Hamill, the Star Wars actor, who spoke of how he had to keep the Star Wars storyline secret. The headline was:

Narrator
Another version of the phrase is Mum's the word.

Clip 2
Don't tell anyone you saw me here. Mum's the word!

All
Quick, hide, behind the bar, get down, he'll see you…

Will
Good afternoon Bess, a pint of your finest… Bess? Hello? Where is everyone?!

Will
Daughter?! Is all this for me?!

Daughter
Yes, father, it is!

Will
Thank you, Thomas.

Mary
Happy birthday, Mr Will. Have some cherry pie.

Bess
Here Mr Will, pint of ale for you.

Answer
Did you guess correctly? Everyone is hiding from Will because they have organised a surprise party for his birthday. Happy Birthday William!

It's no secret that we like to introduce you to useful English expressions. Now try this quiz to check you've understood the meaning and use of the phrases mum's the word and keep mum.

To party or not to party...

Daughter replies by saying "Give no words but mum… I promise, I won't say a word to anyone. Really, I won't!"

Which phrase is Shakespearean and which is modern?

帮助
Nowadays, we can say ______ to tell someone to keep something a secret.
a mum's the word WWVzLCBub3dhZGF5cyB3ZSBzYXkgJ211bSdzIHRoZSB3b3JkJyAtICdnaXZlIG5vIHdvcmRzIGJ1dCBtdW0nIHdhcyB1c2VkIGluIFNoYWtlc3BlYXJlJ3MgdGltZS4=
b give no words but mum U29ycnksIG5vd2FkYXlzIHdlIHNheSAnbXVtJ3MgdGhlIHdvcmQnIC0gJ2dpdmUgbm8gd29yZHMgYnV0IG11bScgd2FzIHVzZWQgaW4gU2hha2VzcGVhcmUncyB0aW1lLg==

Which phrase did Mark Hamill, the Star Wars actor use?

帮助
Or we can say:
a keep mum WWVzLCB3ZSBjYW4gYWxzbyB1c2UgJ2tlZXAgbXVtJyBub3dhZGF5cy4gVGhlcmUgaXMgYSBtb2Rlcm4gdmVyc2lvbiBvZiAnc2VhbCB1cCB5b3VyIGxpcHMnIHdoaWNoIHdlIHdpbGwgaW50cm9kdWNlIHRvIHlvdSBvbiB0aGUgbmV4dCBwYWdlLg==
b seal up your lips U29ycnksIHdlIGNhbiBhbHNvIHVzZSAna2VlcCBtdW0nIG5vd2FkYXlzLiBUaGVyZSBpcyBhIG1vZGVybiB2ZXJzaW9uIG9mICdzZWFsIHVwIHlvdXIgbGlwcycgd2hpY2ggd2Ugd2lsbCBpbnRyb2R1Y2UgdG8geW91IG9uIHRoZSBuZXh0IHBhZ2Uu

What he was holding in the video?

How did you do?
3-4 correct - congratulations, you're now ready to tell your own secrets.
0-2 correct - oh dear, we'll let you try again - but mum's the word!

On the next pages we're going to reveal some secrets - and useful phrases to talk about secrets. Come with us, but shh - mum's the word!