Britain has to change its plans on day one of Brexit talks. Neil and Catherine teach you the language the world's media is using to discuss this story.

Which of these words is NOT a way of describing the end of a relationship? 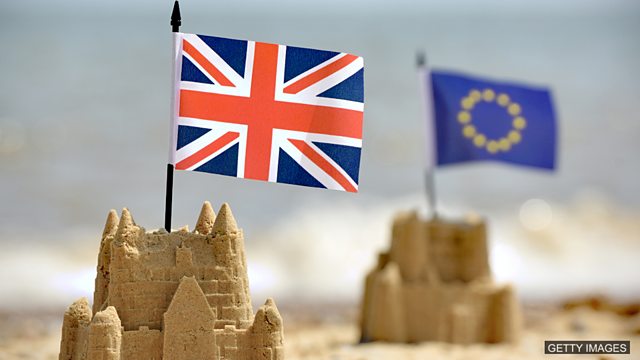 Britain appears to have accepted the European Union's phased approach to the Brexit negotiations on the first day of formal talks in Brussels.

The British Brexit minister, David Davis, agreed to set aside discussion on a future trade agreement until the two sides had addressed issues including the financial divorce settlement and the rights of expatriates, which he said would be settled quickly.

caves in
accepts an unwanted position after being put under pressure

rules out
decides against

begin a debate, argument or fight

ድጋፍ
The brothers often ______ over politics but they always make up in the end.
a cave in VGhhdCdzIG5vdCB0aGUgcmlnaHQgYW5zd2VyLiBZb3UgbmVlZCBzb21ldGhpbmcgdGhhdCBtZWFucyAnYmVnaW4gYSBkZWJhdGUsIGFyZ3VtZW50IG9yIGZpZ2h0Jy4=
b lock horns V2VsbCBkb25lIQ==
c rule out VGhhdCdzIG5vdCB0aGUgcmlnaHQgYW5zd2VyLiBZb3UgbmVlZCBzb21ldGhpbmcgdGhhdCBtZWFucyAnYmVnaW4gYSBkZWJhdGUsIGFyZ3VtZW50IG9yIGZpZ2h0Jy4=

ድጋፍ
After eight years of retirement, Gonzalez ______ a return to football management.
a caved in U29ycnksIHRoYXQncyB3cm9uZy4gWW91IG5lZWQgYSB3b3JkIHRoYXQgbWVhbnMgJ2RlY2lkZWQgYWdhaW5zdCcu
b locked horns U29ycnksIHRoYXQncyB3cm9uZy4gWW91IG5lZWQgYSB3b3JkIHRoYXQgbWVhbnMgJ2RlY2lkZWQgYWdhaW5zdCcu
c ruled out V2VsbCBkb25lIQ==

accepts an unwanted position after being put under pressure

Join us in Session 3 for Pronunciation in the News - our video which teaches you pronunciation using the latest BBC World News bulletins.