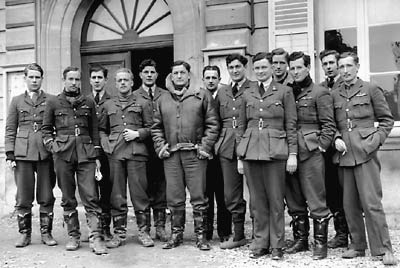 The pilots of 1 Squadron
Previous Back to index

The pilots of 1 Squadron

The pilots of 1 Squadron

Most of 1 Squadron's well trained and experienced pilots are seen here shortly before the outbreak of the blitzkrieg on 10 May 1940. The commanding officer, Squadron Leader PH 'Bull' Halahan, is in the centre, wearing a sheepskin flying jacket.

On the far left is Pilot Officer Billy Drake. Although one of the only two pilots in this photo not to receive a DFC in June 1940 (having been shot down and wounded on 13 May), he was to end the war as the most successful of all this group of outstanding fighter pilots. He had by then been promoted to Wing Commander, and had claimed some 28 aircraft shot down (three of which were shared and two unconfirmed), plus 15 more destroyed on the ground. He had also been awarded a DSO, DFC and Bar, and a US DFC. He remained in the RAF postwar, becoming a Group Captain.

Flight Lieutenant P Prosser Hanks was one of the unit's two flight commanders. He had claimed seven victories when sent home to become an instructor later in May. He ended the war as a Wing Commander, credited with 13 enemy aircraft shot down. Between him and Halahan is Pilot Officer PWO 'Boy' Mould (see below).

Behind 'Bull' Halahan's left shoulder is Jean-François Demozay. A civilian pilot before the war, he had been loaned to the squadron as French interpreter. He fled to England when France fell, and became a fighter pilot, joining 1 Squadron in this role late in 1940. He ended the war as a Wing Commander, credited with 18 victories, but was then killed in an aircraft accident on 19 December 1945.

The senior flight commander, Flight Lieutenant PR 'Johnnie' Walker, is next. He claimed eight successes in combat during spring 1940, and ended the war as a Group Captain. Standing in front of Walker and the next two pilots is Flight Lieutenant DM Brown, the squadron medical officer. Behind his left shoulder is Flying Officer JI Kilmartin (see below).

Almost hidden behind Brown and Kilmartin is Flying Officer PHM Richey, later author of Fighter Pilot, one of the classic books of the war. Before he was wounded on 19 May, Paul Richey had claimed ten victories. He later returned to operations in 1941, and also ended the war as a Wing Commander.

Another, almost hidden behind his colleagues, is New Zealander Flying Officer WH Stratton (see below), and the last in the line is Flying Officer CD 'Pussy' Palmer, born in the USA of British parentage. He later became a Squadron Leader, but was shot down and killed over the English Channel on 27 October 1942.

Missing from this group are three other notable officers and three leading NCO pilots. The third representative of the Commonwealth was Flying Officer MH 'Hilly' Brown from Canada, who was on leave when the photograph was taken. He had claimed some 17 victories when the squadron left France in June, having overtaken Clisby as the top-scorer for the unit in 1940. Becoming Commanding Officer soon after the return to England, he also flew during the Battle of Britain. He became a Wing Commander in 1941, but was shot down and killed over Sicily on 12 November 1941.

Flying Officer GPH Matthews joined the squadron in August 1939. He claimed five victories during May-June 1940, ending the war as a Squadron Leader, with 11 victories credited to him.

Pilot Officer PV Boot had arrived only in March 1940 as a reinforcement, having just retrained as a fighter pilot. The 1 Squadron ethos and example obviously enveloped him rapidly, for by 5 June he had claimed five aircraft shot down. He later took part in the Battle of Britain before becoming an instructor, and was awarded a DFC.

The squadron's outstanding NCO pilot was Flight Sergeant FJ Soper, who claimed 13 victories over France during 1940. He was later commissioned and by 1941 had been given command of his own squadron. He failed to return from a sortie to intercept an intruding German bomber off the Suffolk coast on 5 October 1941.

Flight Sergeant AV 'Darky' Clowes had claimed seven successes by 18 June 1940. He too was commissioned later in the year, subsequently becoming a Squadron Commander. A third notable NCO was Flight Sergeant FG Berry, who shot down the bomber that had just bombed the troopship Lancastrian in St Nazaire harbour on 17 June 1940. He was killed shortly afterwards, on 1 September, during the Battle of Britain.