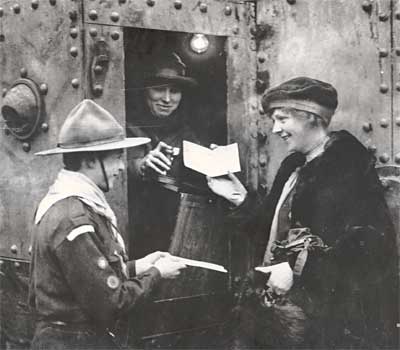 Banking on the tank

Banking on the tank

In November 1917, the Tank Corps achieved its first concentrated breakthrough at Cambrai, more than a year after tanks were first used in the Battle of the Somme. News of this success increased public desire to see the charismatic new war machine, thereby creating a fundraising opportunity for the National War Savings Committee.

Charged with raising money for the war, the Committee initiated a ‘Tank Bank’ campaign which, though carried out at home, would become one of the most successful tank operations of the entire war.

The first Tank Bank was established shortly after the Battle of Cambrai. A battered tank named ‘Egbert’ was recovered from the battlefield, shipped to London and installed in Trafalgar Square. People were then invited to buy war bonds and certificates, and to queue up outside this unlikely ‘new god’ so that their bonds could be specially stamped by young women seated inside the tank.

Having proved successful in Trafalgar Square, the campaign was soon extended elsewhere. A collection of tanks was brought back from France and toured around the country, under the guidance of the National War Savings Committee’s ‘tank organisers’, spending a week at a time in scores of cities and towns.

As in London, politicians, churchmen, war heroes and theatrical celebrities were invited to perform and address the crowds from the top of the tank. A competitive league was established to see which town could raise most per head of population, and the atmosphere that built up around the visiting tanks at the end of their week-long visit was likened to a pre-war football cup final.

The Tank Banks were reported to have raised prodigious sums of money as they travelled from one place to the next. Large employers invested through the tanks, but they were also said to be particularly effective in attracting investment from the working class and people without bank accounts.

But fundraising was not their only role. The Committee’s tanks were taken to exert their ‘moral effect’ in areas troubled by political militancy.

In South Wales, the Tank Banks were used not just to sell war bonds, but to stir up a ‘tank patriotism’ that could be turned against miners who opposed the war and were taking their lead from the peace proposals made by Leon Trotsky and Vladimir Lenin following the Bolshevik takeover of Russia in November 1917.