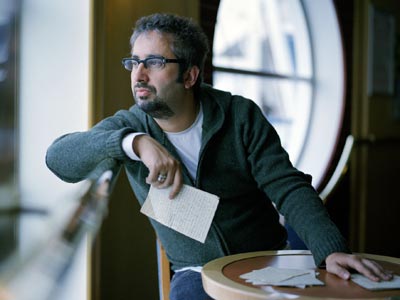 David Baddiel
Previous Back to index

In recent years, David has become increasingly interested in his family history, and he has written a novel, The Secret Purpose (Little, Brown, 2004) based loosely on the story of his maternal grandparents, who were Jewish and who fled from the Holocaust. David's book focuses on themes of immigration and race, dominant subjects in his own genealogy.

David's maternal grandfather, Ernst, was the director of a brickworks, employing more than 1,000 people. Before the war, he travelled in a chauffeur-driven Mercedes, and his wife Oti was aided by a large domestic staff to host parties, and worked for charitable causes.

The persecution of the Jews increased. After Kristallnacht (a night of organised riots, when synagogues and Jewish-owned homes and businesses were attacked throughout Germany and Austria) Ernst was forced to spend a month in a penal camp, and was given an ultimatum either to leave Germany or to face an uncertain future. So in August 1939 the couple fled Konigsberg and travelled to Berlin, from where they caught the train to Bremerhaven and sailed to England. Baby Sarah spent the journey asleep, safely hidden in the string luggage-rack of her parents' train compartment.

The family arrived in Southampton with only the clothes they were wearing, a situation far from the comfortable life they had led in Germany prior to the rise of the Third Reich.

When Ernst emerged from internment, he found he would have to start work from scratch, taking any job available to him. He worked in various capacities, from fruit-picker to porter, from waiter to factory worker. The experience of losing his business in Germany, however, and the humiliation of his internment, left him a shadow of the entrepreneur he had once been, and he spent the rest of his life moving from job to job.

After Ernst and Oti escaped to Britain, they tried to keep in touch with Arno. As late as 1940 he was living in the Warsaw ghetto, from where he wrote his final letters to them. But after that there was no more news.

As part of his family history research, David visited Warsaw and carried out some enquiries. Three possibilities emerged regarding Arno's fate. He might have died of starvation or typhoid in the terrible conditions in the ghetto. He might have been deported to a concentration camp, where he died or was killed. Finally, he may have died playing a part in the Warsaw Uprising of 1943, because his last known address was near to the Jewish Resistance bunker. The truth will never be known, but David is pleased to have got a little closer to the story of his own grandparents.