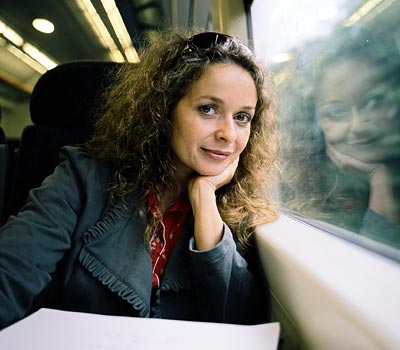 Julia Sawalha
Previous Back to index

Julia Sawalha is best known for her roles in Absolutely Fabulous and Pride and Prejudice. She has a very interesting and mixed background. Her father, Nadim, came to England in the 1950s from his native Jordan, where he met and married Julia's mother, Roberta. Julia had always felt quite strongly influenced by her father's side of the family, so decided to start her quest by investigating her less well known maternal links.

Roberta's grandmother was Gladys Dubock, and as a consequence of her surname assumed that there was a connection with France, possibly of Huguenot extraction. (The Huguenots were a group of Protestant refugees who first came to England fleeing from persecution in France in the 16th century.) Yet there was no proof for such a connection - a common problem for many people make assumptions based on the 'sound' of a name. So Julia's first task was to build her family tree, using certificates and census returns at the Family Records Centre, London.

After tracking her family back six generations, she eventually located William Dubock, a grocer and cheesemonger in the 1881 and 1871 censuses. However, he is listed as a silk weaver in the 1861 census - one of the most common professions amongst the Huguenot community that established itself around Spitalfields and Soho, London. Indeed, further research provided a link back to Peter Dubock in the early 18th century, confirming that for four generations her family had been silk weavers. The change in profession was forced upon William in the 19th century, when the French invented a superior loom and were able to mass-produce silk goods far more cheaply than their English counterparts. In 1861, a trade ban on French goods was lifted and the market was immediately flooded with cheaper goods, driving thousands of weavers out of work. The fortunate ones were able to switch trades to survive, hence William became a grocer. Many others found manual work on the railways or the docks, but the less fortunate starved, or ended up in the workhouse. The area around Spitalfields quickly descended into a slum.

Confirmation of Julia's Huguenot roots was eventually proved via Peter Dubock's grandfather, Daniel Dubock, who fled from a small village in Normandy called Luneray in the 17th century. He was one of nearly 200,000 Huguenots who fled after the French King Louis XIV passed a decree in 1685 banning Protestant worship in France and stripping Huguenots of their civil rights. This meant they were unable to inherit property, their marriages were invalidated resulting in their children being declared illegitimate and they had to bury their dead in secret. No wonder so many sought a new life overseas.

Having found out the history of her mother's side of the family, Julia then investigated her paternal lineage. Nadim's parents, Jochim and Julia senior, had lived in Jordan all their lives and married in 1920s at a time when society was changing. Jochim's family were Bedouins, tribal people who lived a nomadic existence in the desert. Yet Julia senior (maiden name Marar) ran a hotel and a string of businesses in the capital, Amman. It was an unusual position for a woman to hold and one that later won her recognition from the king of Jordan.

This was also quite a change from her Jordanian family's traditional roots. The Marar family came from a small rural town called Madaba, 30 miles from Amman, which was also the tribal home of Jochim's family. At the time, your tribe was a more important social grouping than your family, though things subsequently changed as Jordan became more Westernised. Julia discovered that Julia senior's mother originally came from a different tribe, the Oozates, who had been nomadic farmers in the south for centuries, following the same pattern of life until their move to Madaba in 1880.