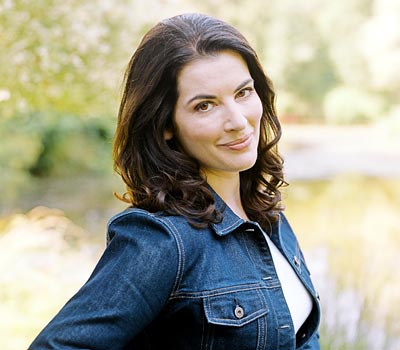 Nigella Lawson
Previous Back to index

Nigella knows quite a lot about her background, mainly because several of her ancestors are quite famous figures. For a start, her father, Nigel Lawson, was Margaret Thatcher's chancellor of the exchequer for many years, while her mother, Vanessa Salmon, was an heiress born into the Lyons Coffee House dynasty. As a British institution, Nigella is acquainted with the history of the company. Instead of trading in tea, they originally sold tobacco under the name Salmon and Gluckstein. But what can she find out about her relatives who started the business? And what about other branches of her family? Are there Jewish connections, as she suspects?

She started with her mother's family, the Salmons, and their links to Lyons. Her grandfather, Felix Salmon, was instrumental in running the company and shaping its direction towards the famous Lyons cornerhouse tearooms. Travelling around London, many of today's famous landmark buildings, such as the Trocadero and Hard Rock Café, were formerly in possession of Lyons. Yet despite his success, he was a melancholy man, and one possible cause could be his wartime role. He was a member of the catering corps, and it appears from research at the Imperial War Museum that he might have been attached to one of the regiments that liberated the German concentration camp at Belsen. One cannot begin to imagine the trauma of the event, particularly for a Jew in the catering corps, responsible for famine relief for the liberated inmates.

Nigella continued to investigate the history of the company, turning her attention to Salmon and Gluckstein, the tobacco sellers, who claimed to be the largest in Europe at their launch in 1873. One of the founding fathers was her great-great-grandfather, Barnett Salmon. His surname was originally Solomon. On the 1841 census it transpired that his father Aaron Solomon was a clothes dealer in the East End. Barnett started work as a travelling tobacco salesman. He married Helena Gluckstein in 1863, and went into business with his father-in-law, Samuel Gluckstein. It was on the back of the success as a tobacco company that Lyons was born in 1889. To ensure none of his family was ever threatened with poverty he set up a family fund, but equally insisted that none of the women were allowed to work. At his death, Barnett was worth £3.5 million in today's money, and set up a trust fund for his wife worth £34 million.

The Glucksteins had become naturalised citizens in 1861. Samuel originally hailed from Germany and his wife Hannah was from the Netherlands. Like Barnett Salmon, his early years in this country were very humble, based also in the East End among the Jewish community. Nigella visited his place of birth in Rheinberg and discovered his birth certificate. It revealed the name of his father, Lehmann, along with the fact that he was a professor of languages. But her travels were not over. Samuel's wife, Hannah Joseph, was born in Amsterdam and Nigella had a hunch that she was part of an ethnic group of Sephardic Jews who had travelled from Spain and Portugal in the 16th century. Hannah's original surname was Sammes, but that name was of Dutch Israeli background, suggesting she belonged to the north European Ashkenazi ethnic group. Yet Nigella's disappointment was tempered by the fact that the meaning of Sammes derived from 'carer of the synagogue', a position of great respect in the community. By contrast, Hannah's father, Coennraad, had been accused of theft and had been tried, convicted and sentenced to 18 months imprisonment in 1830. He never served his sentence, instead fleeing the country and turning up with his family in England. Without his flight, Hannah would not have come to England.