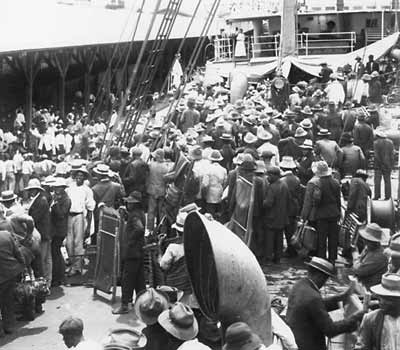 Caribbean workers arriving in Panama, on board the 'Cristobal'
Previous Back to index

Caribbean workers arriving in Panama, on board the 'Cristobal'

Most of the Canal's workforce during the US construction period in the early 20th century arrived in Panama from the West Indies, on board the steamship Cristobal.

Panama's population was relatively sparse, and the Americans discovered that there was no surplus labour anywhere in the republic for the Canal's construction. It became clear that the higher grades of skilled labour would have to come from the United States, whilst for the rest of the workforce the islands of the Caribbean were a logical source.

However, the Caribbean governments were reluctant to allow recruiting, because at the end of the French period of construction, many of the West Indian labourers had been stranded in Panama, and they had to be repatriated at their governments' expense.

The Barbados government finally agreed to large-scale recruitment, however, and eventually there were some 19,900 Barbadian labourers working on the Canal project. This was reportedly some 10 per cent of the population of Barbados, and nearly 40 per cent of the island's adult men. Later, workers were also recruited from Martinique and Guadeloupe.

Jamaica refused to allow any recruiting, and placed a tax of one pound sterling on anyone wishing to work in Panama. This meant that the Jamaican workers in Panama were mostly skilled workers, as only they could afford the tax.

The workforce of both periods of construction had to contend with disease on the Isthmus. For the French, malaria was a bigger killer than yellow fever. The French canal company established two hospitals, but ignorance about the causes of malaria meant that the hospitals actually became mosquito breeding grounds, and meant that more people died than ever.

Later, as a result of greater medical understanding, the death rate from malaria reduced considerably. This was achieved by the clearing away of vegetation, the spraying of standing water, and a host of other preventive measures.

The History of the Home