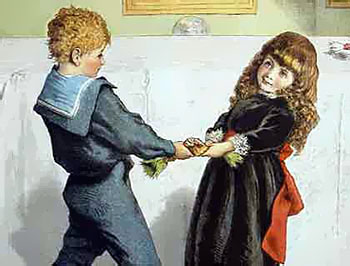 Illustration of children pulling a cracker from 'The Graphic Christmas', 1878
Previous Back to index

'If there is one thing inseparable from Christmas in general and the little ones' seasonable gatherings in particular, it is - a cracker. With what a delightful look of expectation they have waited for it to go "bang", and how they have screamed as they scrambled after the surprise which came in response to the explosion ...'.

So observed a Victorian writer about one of the two real Christmas innovations of the period: the Christmas cracker.

The story of the Christmas cracker is really a testament to one man's ingenuity and determination. Tom Smith was a confectioner's apprentice in London in the early 19th century. On a trip to Paris in 1840, he admired the French sugared almond bon-bons, wrapped in coloured tissue paper, and decided to introduce them in London. These bon-bons were popular, but not quite as Smith had hoped.

For seven years he worked to develop the bon-bon into something more exciting, but it was not until he sat one evening in front of his fireplace that his great idea came to him. Watching the logs crackle, he imagined a bon-bon with a pop. He made a coloured paper wrapper and put in it another strip of paper impregnated with chemicals which, when rubbed, created enough friction to produce a noise. He knew that bangs excited children (and were said to frighten evil spirits) - and the mottoes and poems he inserted inside the crackers amused adults.

The combination of innovation and tradition which is a hallmark of the Victorian period also marked another creation of the 1840s - the Christmas card, an altogether more pragmatic 'invention' than the cracker.

Sir Henry Cole, burdened by the amount of seasonal correspondence he felt obliged to write, first conceived of a dedicated Christmas card in 1843. His idea was to print a seasonal greeting card which would save hours of handwriting, and he engaged his friend, the artist John Horsley, to design nearly 1000 hand-coloured lithographs.

The standardisation and lowering of postage rates in 1840, which made letters easier and cheaper to send, contributed to the rapid spread of this new custom. Designs featured Christmas scenes, including Father Christmas, robins, evergreens and snow scenes but also a range of non-Christmas designs, much like Valentine cards.