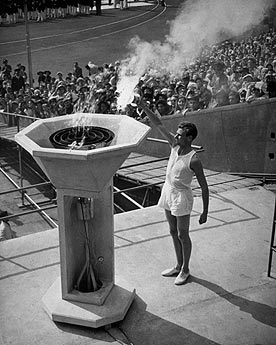 The Wembley cauldron is lit
Back to index

The Wembley cauldron is lit

The highlight of the opening ceremony in 1948. John Mark, a former Cambridge University athlete and a symbol of British youth, lights the cauldron in Wembley stadium. The flame had been lit 12 days before in Olympia, and carried a distance of 3160km by some 1531 runners, including two stretches in Royal Navy vessels.

Unlike Berlin in 1936, there was no specially built village for competitors, so the men were put up in military camps, and the women at colleges. Wembley Stadium, the home of British football, was the main venue, and a temporary running track was laid around the pitch, and other buildings were adapted for various sports.

Swimming took place in the Empire Pool, Wembley, the rowing events were held at Henley on the River Thames, and the sailing was at Torbay in Devon. For the first few days at least London had some of the hottest weather for years, but later it rained.

A record 59 countries sent a total of 4,099 competitors, but, not surprisingly, Germany and Japan were not invited. Unlike in 1908, there was no tennis, the sport having been dropped from the Olympic programme after 1924. It was not reinstated until 1988.