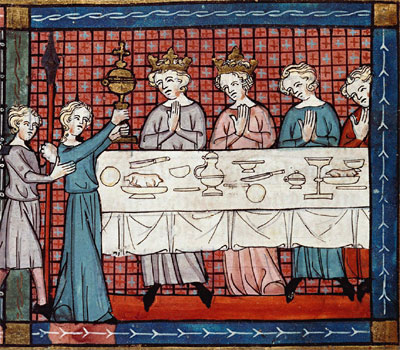 Origin of the Grail

Perceval, the knight innocent in the ways of the world, arrives at the castle of the Fisher King, who suffers from a mysterious ailment or wound. A strange procession appears, in which a girl carries in the Grail, accompanied by a boy with a mysterious spear which magically bleeds from the tip.

The image presents the procession of the Grail, as if seen by Perceval.

But Perceval knows nothing about the meaning of all this, and if he asks the simple question 'Whom does the Grail serve?', in other words, what is going on in front of his eyes, the Fisher King will be cured.

But he has been told that day that it is not good manners to ask too many questions. So, misunderstanding the advice, he keeps silent, and says nothing.

Such paintings were usually carried out quite separately to the writing of the medieval manuscripts they illustrated, and often to very brief instructions written by the scribe. The artist often either misunderstood or ignored his instructions, and the details of this picture do not accord exactly with the text.

The spear should precede the Grail, and the artist shows the Grail not as a dish, but in the shape it takes in later stories, as a cup with an elaborate cover. A king and queen watch the procession, but there is no mention of a queen in the text; and the sword and bier do not belong to the original story. But what we do get is the impression of a ritual which we do not understand, seen with an innocent eye.

This story was invented by Chrétien de Troyes at the end of the 12th century. He was a great poet who wrote about the newly fashionable ideals of chivalry, and about tournaments. His last romance, known either as 'Perceval' or 'The Story of the Grail', was his most ambitious. Until now he had written about experienced knights and their love affairs, but in this book he set out to show a knight on the journey to chivalric and spiritual maturity.

He never completed his poem, so the answer to the riddle had to be guessed by the writers who came after him. But details such as the bleeding spear are very similar to stories about the relics of Christ's crucifixion, and it is very probable that Chrétien’s Grail has a similar close link with that event.