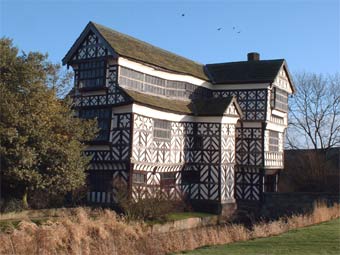 Timber-framed houses
Previous Back to index

The present Little Moreton Hall (pictured) was begun in the mid 15th century and was finally completed in 1610. It has been little altered since then, providing one of the finest examples of a timber-framed, moated manor house in England.

Stokesay House dates back to the Normans but the current building was started in 1281 by Lawrence of Ludlow, a wealthy wool merchant. More domestic than military, it was completed around ten years later when Edward I gave him a 'license to crenellate'. Unfortunately Lawrence died only three years later.

Stokesay House's only military encounter occurred during the English Civil War in 1645, when it was besieged by Cromwell's troops after they had captured Shrewsbury. Cromwell ordered the building to be demolished but only the curtain walls linking the gatehouse to the main building were removed, two years later.

Harvington Hall is best known for its priest-holes, installed around the time the house was built in the 1580s by Nicholas Owen. The holes are all situated around the Great Staircase and were created to hide Catholic priests during the reign of Elizabeth I. Captured priests were often tortured and executed as traitors.

Nicholas Owen was servant to Father Henry Garnet, the Jesuit superior in England. He trained as a carpenter and mason and built priest-holes in Catholic houses around the country from 1588. During 1594 he was twice imprisoned and tortured, but went on to mastermind Garnet's escape from the Tower of London in 1597.

Elizabethan country houses blended Italian Renaissance and Dutch influences, particularly with their curved gables. The Tudor courtyard design gave way to more open-plan buildings, many in the shape of an E, and stone was once more a popular material. Windows became bigger, and carved or moulded strapwork created symmetrical geometric patterns which typified the style of the Elizabethan era.

Tudor houses would typically include lavish use of half-timber work, large groups of rectangular windows and complex roofs with many gables. The chimneys were frequently highly ornate, and the brickwork often patterned. Inside, the walls were richly panelled with wood, and ceilings, cornices and walls were decorated with moulded plasterwork.

Some of the best Elizabethan architecture is at Longleat. The Great Hall - which was the centre of Elizabethan activity - has a 35ft high ceiling supported by ten hammer beams, and a Minstrel's Gallery was added around 1600. In 1663 the Small Gallery was created to honour an overnight stay by Charles II and Queen Catherine.