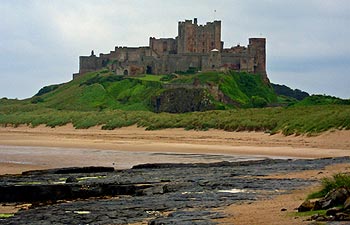 Bamburgh is one of the most spectacular of England’s coastal castles, with a long and complex history.

Some important early medieval archaeology survives below the Norman castle that we see today. Excavations in the 1970s and more recently show that the site was one of the key strongholds of Anglo-Saxon Northumbria. The outcrop of basalt rock (known as the Whin Sill) on which it is built was occupied from around AD 500, and recent excavations have revealed part of what may be the entrance of the early structure, and the stonewall that defended it.

A castle was probably first built on the site in the sixth century, and was a part of the forward frontier separating England from Scotland. It is traditionally said to have been founded in 547 by King Ida, one of the first Anglian rulers of the north. The name means 'Bebbe’s fort' - probably taken from the name of Ida's grandson's queen - the grandson being King Aethelfrith of Bernicia (593-617). Part of a pagan Anglian cemetery has recently been excavated outside the castle walls.

Bamburgh was particularly important under Oswald (king and saint), who succeeded Aethelfrith and converted to Christianity. The twin centres of Bamburgh and the monastery of nearby Lindisfarne were to be the focus of the Northumbrian golden age in the seventh and eighth centuries, and the excavations have found evidence of high status metal-working, some gold work, and part of a stone chair or throne.

The early structure has long gone, and what remains today is a great Norman keep (dating to c.1120), and a series of bailies contained within the curtain walls. In 1610, with the unification of the Scottish and English crowns accomplished, and the frontier no longer significant, the castle was sold to the local Forster family, who stripped it of its materials. In 1704 it was bought by Lord Crewe, Bishop of Durham, and it was used at different times as a school, a hospital and accommodation for shipwrecked sailors.

The structure's modern restoration as a 'fairy-tale' castle dates to 1894-1905, and was undertaken after it was purchased by Sir William Armstrong, a wealthy Victorian industrialist. The interiors today are heavily panelled, and full of Edwardian gloom. Apart from the keep itself, the only significant medieval rooms are the kitchens and cellars.