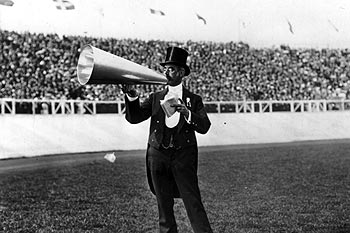 The City Toastmaster makes an announcement to the crowd

This was the way they did it then. The City Toastmaster was roped in to act as a Master of Ceremonies/Announcer at the 1908 Games. He would have announced events, given results and other information to the vast crowd, though one would have thought that only those reasonably near would have heard him, despite his large megaphone. Modern loudspeaker systems didn’t arrive until the 1920s.

Today, in addition to the main scoreboards, there are TV screens, event indicator boards, and announcements made in the official languages of French and English plus the language of the host country. But it all started with somebody like this gentleman.

The new stadium, built for the occasion, had a with a capacity of 68,000, but this was exceeded on a number of occasions. The athletics track measured 3 laps to a mile, outside which was a 660 yards banked concrete cycle track. On the infield was a giant tank, for the swimming events, which measured 100 metres x 15.24 metres.

Rowing was on the River Thames at Henley, while sailing took place primarily at Ryde, Isle of Wight, with some events on the River Clyde. The latter are the only Olympic events which have ever been held in Scotland. The All-England Club hosted tennis at Wimbledon. Among the 21 sports sanctioned were four ice-skating events, also part of these ‘Summer’ Games. Separate Winter Games were not inaugurated until 1924, and they were held at the Prince’s Skating Rink in Knightsbridge, in October. These Games were among the longest ever held, as the first sport, rackets, had started in April. However, the main competitions were in the summer, with the formal opening at the main stadium on 13 July.

Problems arose during these ceremonies, when the American standard bearer refused to dip his flag as the American team passed the Royal Box, and when the Finnish team refused to march under the flag of Czarist Russia. Later, complaints about British chauvinism, ‘fixed heats’, and rule breaking were levelled against the hosts, and to top it all off, the weather was not good. Nevertheless, it was generally acknowledged that these Games were the most successful yet held, and they set a template for future celebrations.