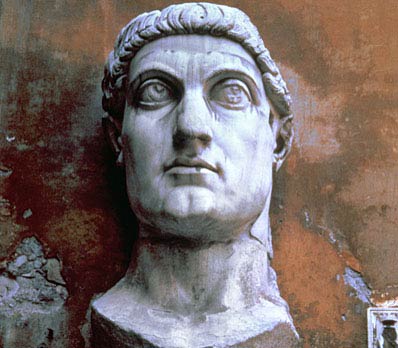 Colossal head of Constantine I 'the Great'
Previous Back to index

Flavius Valerius Constantinus, or Constantine I - also known as Constantine the Great - was the son of Constantius I and Helena. He grew up in a period of near anarchy, brought to an end by Diocletian at the close of the third century AD.

Diocletian established the short lived Tetrarchy, consisting of two senior emperors (Augusti) and two junior emperors (Caesares), who each commanded a quarter of the Roman world. The system was designed to bring cohesion to the fragmenting empire, but instead it created rivalries and further civil wars in which Constantine played a considerable part.

His father Constantius was appointed Caesar and then Augustus, and died on campaign in Britain in 306 AD. His soldiers declared his son, Constantine, emperor. For nearly two decades, Constantine waged war to retain this position. In 312 AD he invaded Italy and defeated one of his rivals, Maxentius, at the Battle of the Milvian Bridge outside Rome. Here, so the legend goes, he saw a cross in the sky, and was told: "In this sign shall you conquer."

When he became sole emperor in 324 AD, he rewrote his own history with the help of Christian authors.He actively promoted the Christian Church, though he was baptised into the faith only on his death bed. Throughout his life he also acknowledged Sol Invictus - the 'Unconquered Sun' - as a god. He may have been a true convert, or he may have used the Church as a strong unifying force - the debate continues.

In the military sphere, he realised that the emperor and his headquarters needed to be near to the Danube and also within reach of the eastern provinces - the two areas from which the most serious threats emanated. Acting upon geographical necessity, he created the new Rome at Byzantium, and renamed it Constantinople.

His reign marked the end of the city of Rome as the capital of the empire.