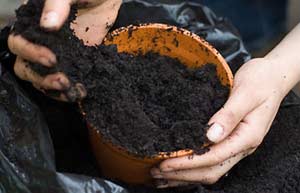 Peat has been used by commercial growers and amateur gardeners since the mid 20th century. Mixed with sand and loam it became a popular high quality growing medium. To meet the demand, acres of UK peat bogs were drained and destroyed. This peatland is now one of the UK's most threatened habitats. The debate about using peat continues.

The effects of using peat-based compost

Environmentalists, the government, and gardening organisations all agree that the use of peat should be phased out and replaced by sustainable and if possible, locally sourced alternatives. Although sales of peat-free and reduced-peat products are on the increase, gardeners still account for most of the peat that is used in composts and growing bags, and seem reluctant to change their buying habits.

You might think of peatbogs as dull expanses of empty, waterlogged land, but if you wandered into the heart of the Mosses National Nature Reserve on the Welsh border you'd find a unique and beautiful range of plant, insect and bird life that depends on the layers of peat that make up this lowland raised bog.

Many gardeners don't realise that multi-purpose compost, unless it's labelled 'peat free', contains between about 70 per cent and 100 per cent peat. But there are clear environmental reasons we should be concerned about using even small amounts of peat. There has been a large growth in the use of peat alternatives by amateur gardeners in recent years but as the total amount of materials we use continues to rise, we're still actually using approximately the same amount of peat in our growing media as we did in the late 1990s.

So why do gardeners still buy peat-based products? "Some gardeners just buy the cheapest to fill up their pots and tubs for the summer - peat-free ones are usually more expensive because they have to be processed more", explains Susie Holmes, co-author of a report on peat and alternative products for growing media and soil improvers in the UK. "Keen gardeners tend to buy the compost they know and trust, and up until recently peat-free ones have had a reputation for being unreliable."

Because of commercial extraction, only about 6,000 hectares of lowland raised bog in the UK remain in pristine or near-natural condition. The latest government figures show that 62 per cent of the peat we use in growing media and soil conditioners comes from other countries, primarily the Republic of Ireland and the Baltic States and Finland. But environmentalists say that we shouldn't be contributing to our carbon footprint by importing this peat and should instead put our resources into using our own natural materials to make sustainable growing media that work.

The quality and consistency of peat-free media has been improving significantly in recent years and it seems that gardeners are finally starting to invest in alternatives. There has also been some speculation that due to poor harvests in recent years, the availability of peat will be reduced and prices may rise. This may encourage gardeners to move towards peat-free products.

A greater quantity of alternative materials, such as bark, coir, green compost and wood waste, is now being used, though not enough to meet the government target of alternatives accounting for 90 per cent of growing media requirements by 2010. This increase is largely because the major retailers, who have strong social and environmental policies, have put pressure on the manufacturers to reduce their peat use.

In 2008, the Growing Media Initiative scheme was launched, managed by the Horticultural Trades Association in conjunction with the Growing Media Association, DIY and Garden Centre retailers, Defra, the Royal Society for the Protection of Birds and the Royal Horticultural Society. It aims to increase awareness of the plight of the world's peatlands and the need to use more sustainable materials in gardens, and in so doing, develop a practical way forward to achieve peat-replacement in the UK. Early in 2009, B&Q stopped selling 100 per cent peat products, and resources are going into developing the use of green waste as an alternative growing medium.

Steve Berry, Wildlife Gardening Officer, Natural England. "Having destroyed most of our own peatbogs we're now helping to destroy those in places like Latvia and Estonia. Most gardeners live a long way from peat bogs and may not see the appeal or the value of them but every time someone uses peat they're contributing to the destruction of this special and important habitat. There are plenty of non-peat alternatives that work almost as well as peat-based products. The more people that use and ask for non-peat ones, the greater the commercial incentive to improve them further."

Richard Gianfrancesco, Head of Research at Gardening Which? "Our trials of garden composts show that some manufacturers have made decent peat-free products for many years but others, especially those at the cheaper end of the market, have been churning out pretty poor ones and consumers have been burned by using these. Manufacturers need to invest in research to develop good performing products. Peat-free composts are heavier, so the haulage costs are higher. They tend to be fairly coarse too and generally are not particularly good for seed sowing, especially of small seeds. For gardeners who want to reduce their peat use, Gardening Which? recommends either sieving a good quality peat-free one, or buying a small bag of peat-based compost for sowing and then using a peat-free compost mixed with slow-release fertiliser when growing on in tubs and baskets. The available nitrogen in peat-free composts can be used up by the continuing decomposition of the materials in the bag so if your plants are struggling it's worth giving the plants a liquid feed."

What you can do